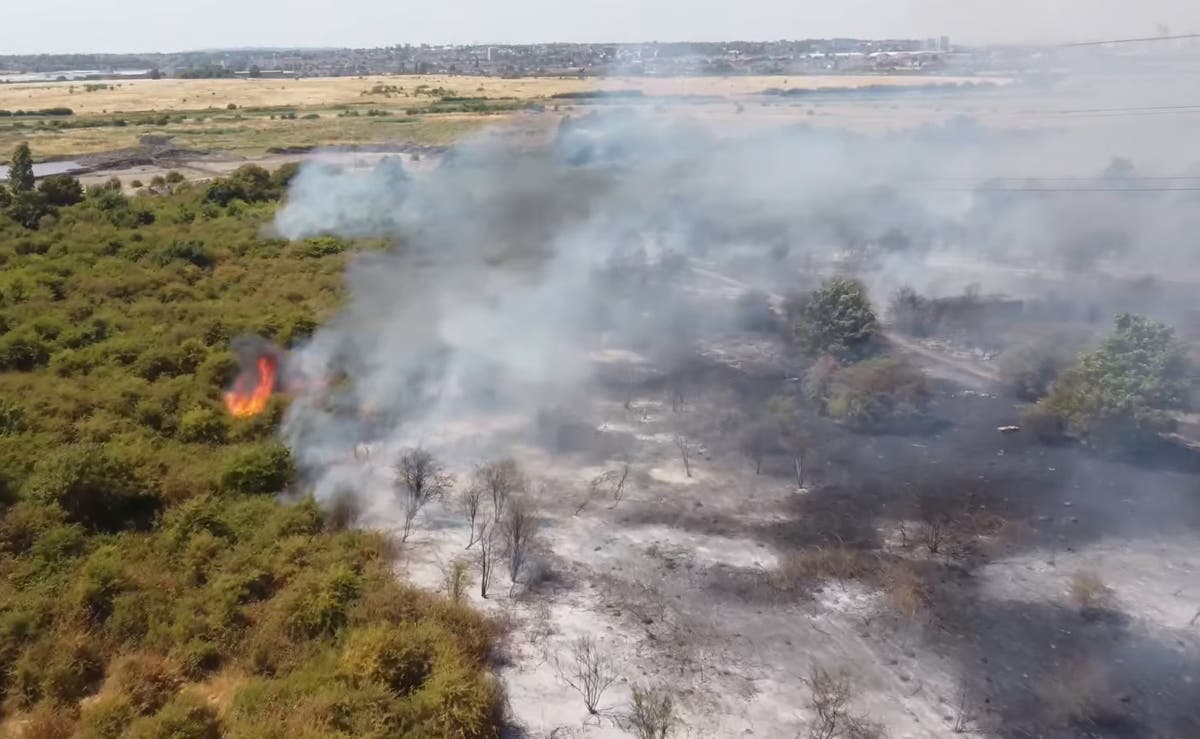 ngland is braced for storms after a day of record heat that saw firefighters face their busiest day since the Second World War and major travel disruption across the country.

Major incidents were declared in London, Norfolk, Suffolk, Lincolnshire, Leicestershire and South Yorkshire on Tuesday as fires broke out in several areas amid the tinder-dry conditions.

Two “large-scale” incidents took place in Upminster and the village of Wennington, east London, where black smoke billowed into the air, while flames destroyed buildings and ravaged nearby fields.

Sadiq Khan said the LFB had experienced its busiest day on record, receiving more than 2,600 calls throughout the day – seven times the usual number.

The London Mayor told Sky News: “Yesterday was the busiest day for the fire service in London since the Second World War.”

He added: “Yesterday they received more than 2,600 calls – more than a dozen simultaneous fires requiring 30 engines, a couple requiring 15, and some requiring 12.

“I’m afraid the bad news is, 41 properties were destroyed in London.”

Simon Clarke, the Chief Secretary to the Treasury, told Sky News that the fires were a “warning sign” about the impact of climate change.

“This is a remarkable, unprecedented event and something which obviously, because people have been saying, we are not used to seeing in this country,” he said.

“What we’ve seen in recent days is not normal and it is a warning sign.”

Lincolnshire, which experienced the country’s hottest temperature on record, 40.3C, in Coningsby on Tuesday afternoon, stood down its major incident status on Wednesday after battling what it described as “searing” conditions.

The temperature in Coningsby beat the UK’s previous record of 38.7C in Cambridge three years ago by 1.6C.

The Met Office said 34 observation sites across England provisionally broke the previous all-time record, ranging from Bramham, in West Yorkshire, to Charlwood, in Surrey, while a further five had equalled it on Tuesday.

Firefighters in Norfolk were called to more than 80 incidents on Tuesday, including one that started in a field in the village of Ashmanhaugh and spread to two homes.

Suffolk Fire and Rescue Service said it had been called to more than 60 incidents, 38 of which were fires in the open, describing the situation as “unprecedented”.

Nine people have died since Saturday in swimming accidents and there has been widespread disruption to train services.

All trains between London Euston and Milton Keynes were suspended as emergency services dealt with a lineside fire in the afternoon.

East Midlands Railway was running limited services between Derby, Nottingham, Luton, Bedford and London, which were due to stop completely between lunchtime and 7pm – the hottest period of the day.

It comes as the temperature is set to drop by up to 10C in some areas on Wednesday, with heavy showers and thunderstorms predicted to lash parts of the country, potentially causing localised flooding and further travel disruption.

Heatwaves are being made more intense, frequent and longer by climate change, and scientists said it would be “virtually impossible” for the UK to have experienced temperatures reaching 40C without human-driven global warming.

However, the Met Office said there would be a showery breakdown of the heat on Wednesday, with a yellow warning for thunderstorms in place for parts of south-east, east and central England in the afternoon and evening.

The service warns people to expect flooding or lightning strikes, delays and some cancellations to train and bus services, spray and sudden flooding, road closures and possible power cuts.

The weather will be fresher for most places, although some parts of East Anglia will still see temperatures reach as high as 30C.

Wednesday’s rain, where it occurs, will be much heavier than on Tuesday.