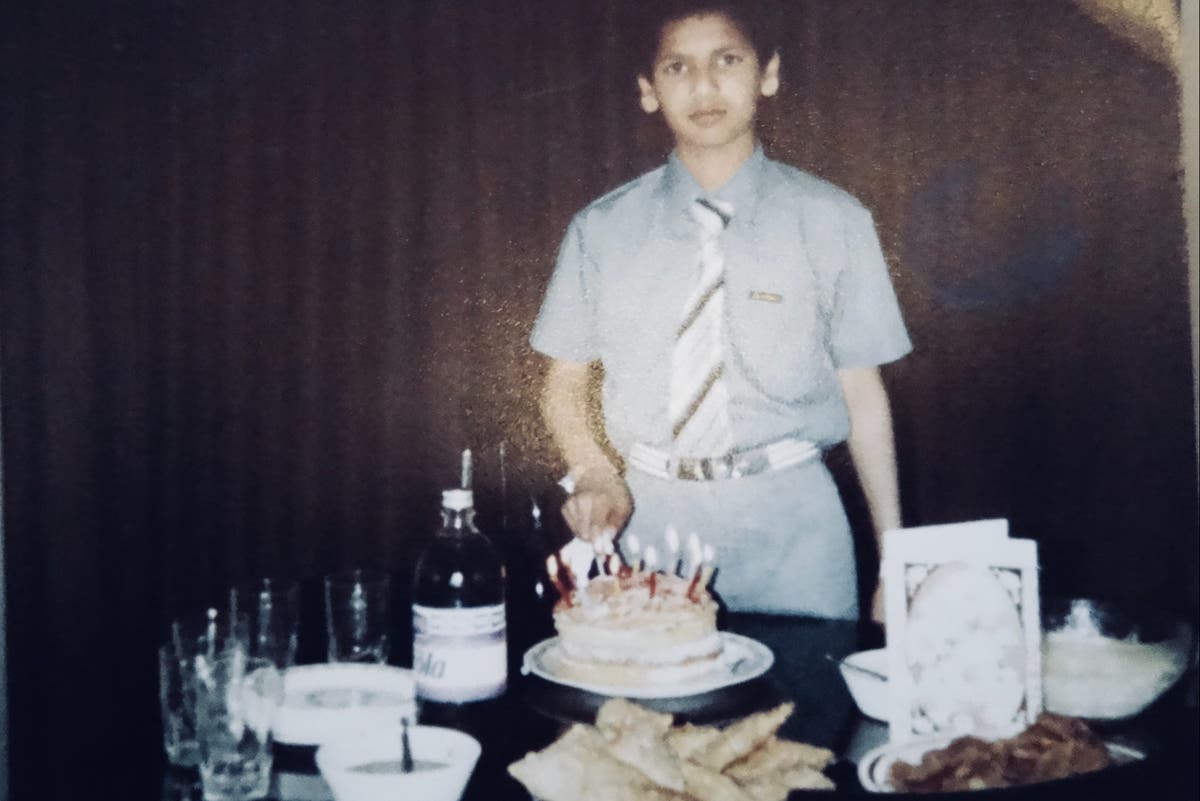 t is the summer of 1982. Adam Ant is at No 1, Margaret Thatcher is in 10 Downing Street and I am turning 11. I celebrate my birthday the same way as I marked all my previous birthdays: a dining table with a sponge cake, a few samosas, a plate of crisps and surrounded by my immediate family. We live in Luton, my dad works on the production line in a car factory and money is tight. I don’t complain about not having presents on my birthday but that does not stop me envying my white friends and their freedoms. I am in my final year of junior school where I am one of only a handful of brown kids in my year. We live in a very white part of town but my parents are forever warning me to stay away from white people. I am told that they have different values from us, they have a different culture and they will never accept us. They are white people. That is why I am not allowed to invite any of my friends to my birthday party because my friends are white. Birthdays are boring and birthdays are scary because with each passing year I get closer to being an adult and all the grown-up horrors that await me: a sensible job and an arranged marriage. I want to travel the world, do something interesting with my life and marry someone I actually love but those things don’t happen to working-class Luton boys from Pakistani Muslim backgrounds. Those are the things I secretly wish for when I close my eyes and blow out the candles in the summer of 1982 on my 11th birthday.

One of the privileges of getting older is that one can chart how the story turned out and compare the hopes and fears of youth with the reality. It is now 40 years since the summer of 1982. In many ways the reality turned out so much better than what I feared. I did not follow my father on to the car production line. I left Luton, moved to London and established a career in the media. That would have been thoroughly unimaginable to my younger self. I remember visiting Luton Central Library as a young boy and browsing the biography section, wondering where the stories of folks like me were. Today my memoir, Greetings from Bury Park, is stocked in the same library I used to visit as a child. These personal successes were only possible because of the ways that Britain was changing. The election of a Labour govern – ment in 1997 was pivotal in promoting a more tolerant and progressive version of Britain. The bad old days felt con – signed to the past and by the time I was in my 30s in the early 00s Britain increasingly felt like a nation that not only tolerated but actually celebrated differences. It was towards the end of that decade, in the summer of 2008, that I met a woman. We started dating and two years later we were mar – ried, the following year we had our first child and five years later a second. I had grown up resigned to having an arranged marriage but again life had turned out better than I had feared: this was a love marriage and, even more aston – ishingly, it was to a woman who was not a Muslim. It was easy to believe, raising our children in our liberal, north London bubble that the progress that had been made in the past four decades was permanent. It was tempting to take it all for granted. Tempting, but dangerous.

The truth was that any progress was made on fragile ground and, when it came to Islam, mutual antipathy and mistrust continued to sour relations. In 2017 a young Muslim man detonated a bomb at an Ariana Grande concert in Manchester, killing 23. This was also the year when three young Muslims in London killed eight people and hurt 48 more in a knife and van attack in London Bridge; when another Muslim man drove a car into pedestrians on Westminster Bridge, injuring more than 50, four of them fatally; and when a man drove a van into Muslim worship – pers in Finsbury Park. I began to feel despondent. The news carries stories of Muslim extremists, Pakistani grooming gangs and the rise of far-right groups and hate preachers who weaponise public weariness around Islam. As I write this, Salman Rushdie lies in hospital, his alleged attacker a 24-year-old Muslim who was not born when The Satanic Verses was published. The debate around free speech and offence has long been a source of conflict and it shows little sign of being settled. All of this appears to confirm a prevalent narrative I often hear: that they have different values from us, they have a different culture and will never accept us. And this time they are Muslims. I know otherwise. I have lived my life on both sides of ‘they’ — growing up in a very Muslim community and now living in a very white world. I married a woman who happened to be white and we raised two children. We were raising them with dual religious and ethnic heritage and I wanted them to grow up feeling that both sides were equally valued and respected. It was around then that I saw a quote someone had tweeted from the American children’s TV presenter Fred Rogers. ‘When I was a boy and I would see scary things in the news,’ Rogers said, ‘my mother would say to me, “Look for the helpers. You will always find people who are helping.”’ That was my call to action — it directly inspired me to write my new book, They. I wanted to understand the sources of conflict and misun derstanding between Muslims and non-Muslims and, more importantly, to offer reasons to feel hopeful. It is a work of reportage — I travelled around the country and spent three years interviewing more than 100 people — and a work of social history. I chart the story of British Muslims through the experiences of a group of men who came to this country in the early Sixties and follow the fortunes of their families and descendants. It is also, at its heart, a profoundly personal story I hope my children will one day read. It is a book that is, I hope, illuminating, informative and inspiring.

The family and country my children are being raised in is a world away from the one I grew up in. My late father wanted his children to thrive but was convinced that the fact we were Pakistani Muslims would hold us back. We had no money but my father dreamt of money, status and respect. I grew up with no South Asian role models to emulate, to point to and think they did it and so maybe I also could. How different and better the Britain of today is: Laila and Ezra are growing up in a UK where brown people are presenting the Today programme on radio, The One Show on television and chairing University Challenge — and that’s just Amol Rajan. Where my childhood was inside a Pakistani bubble with parents who warned me of the dangers of mixing with out – siders, my children enjoy the best of all worlds — London, Luton and Dumfries — and feel comfortable in them all. When I was young my life felt constrained but in so many ways my children’s lives feel limitless. I compare the photo – graphs of when I was a young boy with photographs of my children; all my childhood photos are taken at home because we never went anywhere but my kids have travelled the globe and have photographs to prove it. In many ways my father’s dreams came true through his son and grand – children. I am not blind to the challenges that remain and the work that both Muslims and non-Muslims need to do to understand each other’s fears and suspicions. That was why I wrote They: to do my part in helping foster greater under – standing so we can see what we have in common rather than the ways we are different. I started the book in despair but I ended it feeling hopeful for this country and my children.

It is the summer of 2022. I have no idea who is No 1, Liz Truss looks poised to enter Number 10 and my daughter, Laila, is turning 11. The cake is home-baked not shop bought. There are friends present. She is deluged with presents. In the evening she will go to the theatre with some of her friends before they all come back to ours for a sleepover. It is my children’s good fortune, and mine, that Laila and Ezra are grow – ing up in a country and a time where they have the opportunity to soar as high as their dreams. This story is not yet over but as I watch Laila blow out the candles on her cake I think back to 40 years earlier and another summer and I can’t help but smile at how far we have come.

Sarfraz Manzoor’s ‘They: What Muslims and Non-Muslims Get Wrong About Each Other’ is out in paperback this week