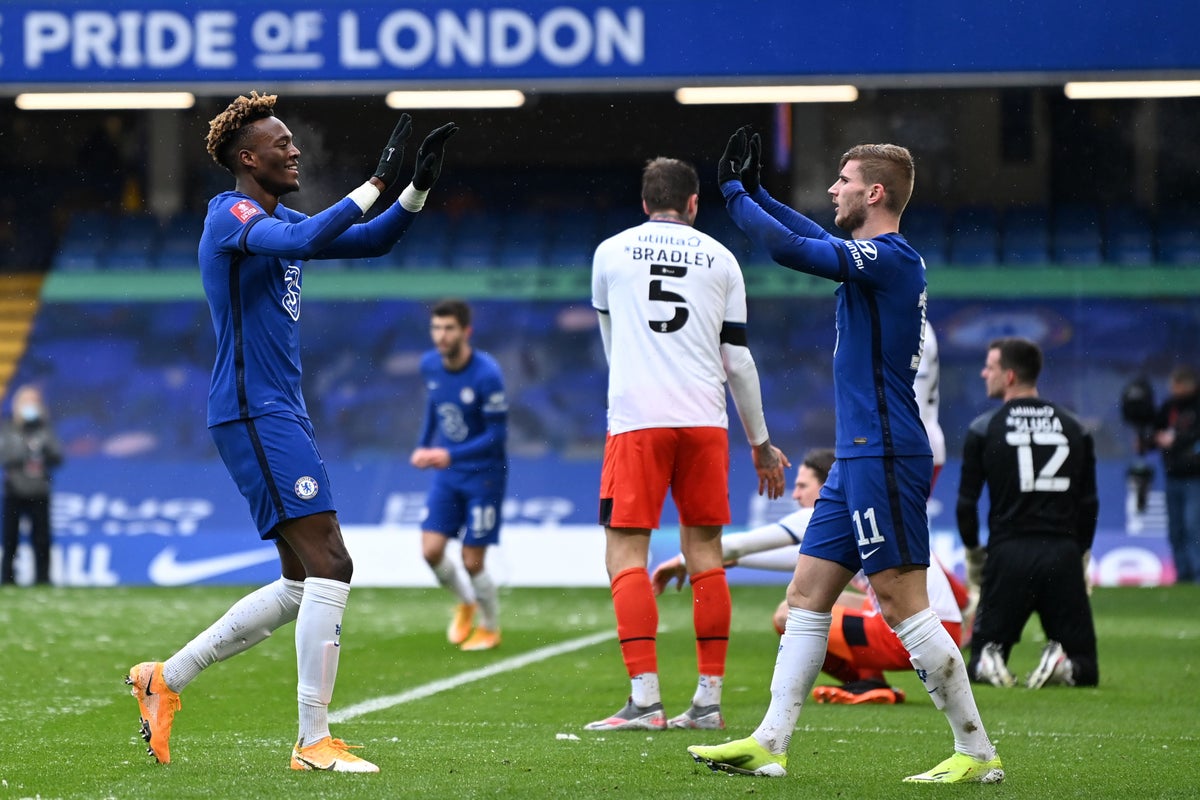 Tammy Abraham struck a smart Stamford Bridge hat-trick as Chelsea drove past stubborn Luton with a 3-1 win and into the FA Cup fifth round.

England hitman Abraham took his Chelsea goal tally to 11 for the season, netting twice in seven first-half minutes before completing his treble late on.

Jordan Clark profited from the struggling Kepa Arrizabalaga’s latest error to claw one back for Championship side Luton, but the Blues ground their way to an important fourth-round win.

Timo Werner missed a late penalty in a frustrating end to his afternoon, but Chelsea will now travel to Barnsley in the fifth round.

This victory was crucial for under-pressure boss Frank Lampard, who will now set about trying to engineer a return to winning ways in the Premier League.

Relive all the latest FA Cup action as it happened with James Robson on our LIVE match blog.

That was really poor penalty from Werner and typical of a player short on confidence. He just wanted to hit the target, but that meant putting it at a nice height for the keeper.

Werner may well end this game without a goal, but it doesn’t tell the whole story. He set up Abraham’s first, and has been bright all day. Had the tired foul not gone in on him there, he would surely have had a goal – but the penalty miss sums up his confidence.

Oh dear. Werner steps up and slams it to Sluga’s left, but the keeper is equal to it!

84 mins: Timo Werner races through, rounds the keeper… and Clark wipes him out for a penalty!

That sums things up for him recently, but surely he’ll take the spot-kick…

80 mins: Luton are still going for it – and why not? With 10 minutes of their FA Cup run left (probably), they’ll want to go out swinging.

It’s a hat-trick for Abraham! Hudson-Odoi does well down the left and puts the ball on a plate for the young striker to surely seal the game.

69 mins: Werner goes down in the Luton area and wants a penalty for a shirt pull – it would have been soft, but it did look a foul anywhere else on the pitch – but the referee decides against it.

66 mins: Lampard is up off the bench trying to get his players focused. Their passing on the break has been a little sloppy, but there is plenty of space to attack to close this game out.

63 mins: Another chance for Luton as a corner is flicked on and Kepa smartly blocks low – but the offside flag goes up anyway. Still, Chelsea are living dangerously and badly need that third goal.